After John Taylor’s conversion to the gospel, he traveled from Canada to Kirtland to meet the prophet Joseph Smith. On his return to trip, he encountered a group of people outside Columbus, Ohio, who asked him to speak to them.
People gathered around on the hillside to listen. As John stood on a wagon tongue to speak about the religious principles of his new found Mormonism, he could see men with tar and feathers lurking in the back of the congregation.
John began to speak, “Gentlemen, I know your forefathers fought for the freedom of all men in this country during the American Revolution. Many of them died for our freedom.”
John paused momentarily, and then his voice rose in strength. “I understand you plan to tar and feather me for preaching. Is this the reason your father’s died in that great war—so you would have the right to tar and feather someone?”
John stood straight and tall. “Come on with your tar and feathers, gentlemen. I am ready.”
A hush came over the people, and every eye was on John. 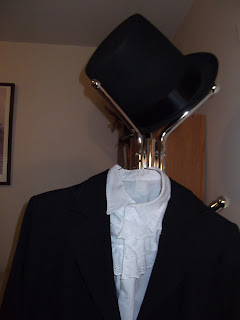 He grabbed hold of his vest and shirt and ripped them open, ready for the tar and feathers. The buttons popped off and fell to the ground. Everyone stood very still—not moving or saying a word.

John began to preach about the truthfulness of the Bible and Book of Mormon. The would-be tar and feathers melted into the background and left the audience.
When I tell this story to Primary children, they love to rip this shirt and jacket open, reliving John Taylor’s moment of courage. Sometimes we tell it over and over again so everyone has a turn to rip the shirt open.
I hope this act of courage and testimony on John Taylor’s part will live in the hearts of these children, spurring them on to their own acts of courage and testimony.

Posted by Christy Monson at 7:23 PM