Brigham Young knew he was getting old. He was very anxious to get his family's temple work done so he dedicated part of the St. George Temple January 1, 1877. The temple was finished and dedicated in it's entirety April 6 - 8, 1877. 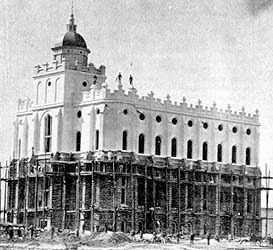 At the January dedication Elder Wilford Woodruff spoke, then Brigham Young Jr. and President Erastus Snow.  Then a hush came over the Saints and everyone looked to Brigham. He struggled to his feet, and as he rose his face shown with light. Leaning on his cane, he made his way carefully to the pulpit. As he began to speak, his voice filled the room.

“When I think upon this subject [temple blessings], I want the tongues of seven thunders
to wake up the people.”

Brigham went on. “I am not half satisfied until I have whipped . . . the devils from this earth.” Brigham raise his cane and smash it down on the podium. Crack! When Brigham put his cane back on the floor, there were two dents in the pulpit from the knots in Brigham’s cane. Brigham's powerful testimony came through whenever he spoke about the Lord's work.

After the dedication, he and his family performed much of the temple work for his ancestors, including his parents.

Read more in Texting Through Time, A Trek With Brigham Young